Gardeners don’t distinguish between invasive and aggressive plants, but I do. My St. John’s wort is invasive. I planted just a few plants along the driveway, and they creep out of their space whenever I turn my back. The wisteria is also invasive.  I planted one plant and it has set its sights on the next county over. I think it has a good chance of making it. Actually, it is also an aggressive plant. They’re capable of attacking a house.

But kiwis are the tigers of the Plant Kingdom. they reach out, take hold, and hang on. They attack. Walk a little too close to a kiwi and it just might reach out and grab you. We planted a male and a female plant (you need both to produce fruit) on a large, heavy pipe framework, about 20 feet long by 5 feet wide by 5 feet tall. They quickly grew onto the frame, and then kept going. Sure, they produced lots of kiwis, but in the end, I was spending way too much time trying to keep them contained to their space. I finally had them removed.

My friends Linda and Pat have two plants that produce more than 1,000 kiwis every year. But Linda says, “They have attacked our blueberry bushes, marionberry plants, rhubarb, boysenberry plants, and keep growing over the top of the greenhouse and through the roof vents.” She says the plants are at least 15 feet tall and can be seen from Google Earth.

This past month, the Potter and I strolled through the Luther Burbank gardens in Santa Rosa, California with my son. We can thank Mr. Burbank, the botanist, for developing more than 800 varieties of new plants back in the early 1900’s, including the Shasta Daisy and the Russet Burbank Potato. He received seeds for a “hairy plum” from New Zealand and propagated them. They were never accepted in this country until many years later–marketed under a new name, “kiwi.” Kiwis actually originated in China, by the way, but then were introduced to New Zealand, and then to us.

We walked through the beautiful gardens and then under a long arbor.The walkway had a long display of photos from Burbank’s life and work. I had strolled the whole length of the walkway before my son called to me, “Look up!” Hundreds of kiwis hung above us on a heavy framework. It was well-trimmed–someone is clearly keeping them confined–but every here and there was a wild branch stretching out, reaching for an escape.

Here’s my son’s photo of me in front of Mr. Burbank’s kiwis. 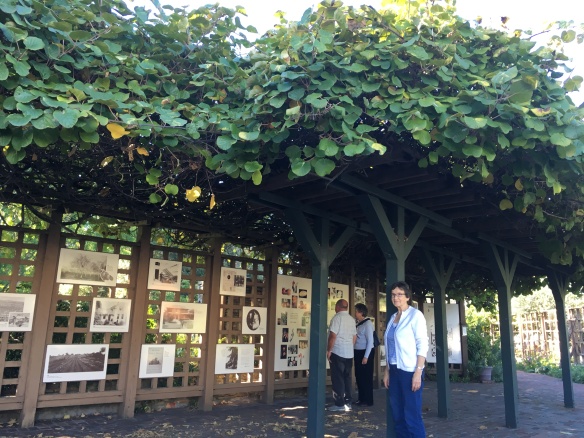