Last spring I realized my daffodils had gotten completely out of hand. I have a nice mix of different varieties, but they had grown out of their little clumps and were scampering back and forth all over my garden areas. After they bloomed and died back, I spent a lot of time in the early summer digging and thinning. I gave little bags of bulbs to anyone who even thought about approaching my back door. 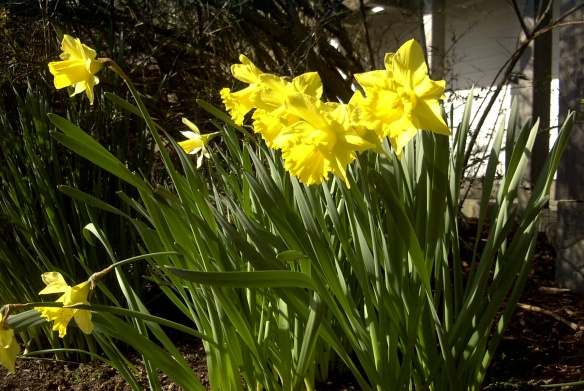 A good friend told me an old family story about his grandfather who grew up in Cornwall, England. He was an acclaimed runner, and in the spring he sometimes ran through whole fields of daffodils in order to get from one place to another. As he ran, the story went, he kicked off the blossoms of any in his path.

Yellow trio in my neighbors’ yard: oregon grape, daffodils, and forsythia, all blooming at once

Ann Lovejoy in her column in early November of last year told another daffodil story. Many years ago Mary Sam, a healer and granddaughter of Chief Sealth, lived in a log cabin on Bainbridge Island on what was then known as “Welfare wagon road” (near Phelps Road and Ellingsen today). Years later a neighbor, Dick Krutch, noticed that she had planted daffodils around where her cabin had been and also around the neighborhood.

Krutch decided that if this woman made such an effort for an old road and cabin, he would like to continue the effort. Over the years he has donated over 100,000 daffodils for the island’s neighborhoods. If you visit Bainbridge Island this time of year, you can’t miss them along the roadsides. Dedicated volunteers have kept the project going.

This variety, the “King Alfred Type” bulbs are a large, hearty, golden blossom. The original King Alfred daffodils were developed in England in the late 1800’s. Lovejoy said that since Port Townsend had a British consulate with gardens, Pacific Northwest gardeners were among the first Americans to grow this sturdy variety that can live for generations.

However, this true King Alfred daffodil is not sold today. Over time, the name “King Alfred” became a generic name for all the bigger “yellow trumpet” varieties. Some botanists believe that nearly all the original King Alfred bulbs in North America were wiped out by a viral disease by the mid-1900’s.

The only true King Alfred variety may be found in old yards that date back to the early 1900’s. A few Dutch bulb growers continue to grow them in order to keep them from becoming extinct, but they’re rarely sold.

Since my house dates back to the early 1900’s (and some bulbs I planted 40 years ago came from a yard of that age, also), do I have the original King Alfred in my yard? I like to think so. Regardless, I enjoy all those spots of bright yellow and remember that closing line of Wordsworth’s poem that I memorized in grade school:

Greeters at my back door

“And then my heart with pleasure fills,
And dances with the daffodils.”