You could call me a dragon. I’m a large lizard, about 16 inches from nose tip to tail tip. Sixteen inches of sheer terror for anyone who might stumble upon me.

You could call me handsome. I have an intricately scaled skin of pale gray-green, a kind of delicate artichoke green color.

You could call me unique. I really am quite special. I am the only such lizard living in the wild in the Pacific Northwest.

So when I crawled out of the bushes one morning to warm up on the grass beside a county road in Poulsbo, I managed to raise the blood pressures of a number of humans who wandered by. The road runs along Liberty Bay, so it’s not my favorite place–way too many people strutting, strolling, and streaking by. Some of those runners go like a shot! If it’s two or three walkers together, it’s talk, talk, talk, talk, talk. Let’s be clear about this–I was still in the grass, so I was partially obscured, but I had my head up, stretching towards the sun. We lizards do that.

Besides being able to jump quite high when alarmed, humans have a peculiar habit of talking out loud to themselves. Bizarre. But certainly entertaining in this situation.

“Lizards don’t live around Puget Sound! It can’t be real. But it sure looks real. I’m outta here!”

“Lizards do NOT live around salt water! It’s not moving. Lizards DO sit very still. Maybe this one was a pet and fell out of a boat passing by? If I touch it with my shoe….nope, not doin’ it!”

One runner had the audacity to skid to a stop, back up, lean over and touch my head. Lucky for him, I was still chilly and slow or I would have snatched a good bite out of his hand for breakfast.

I must have fallen asleep, and the next few days are a hazy blur. I remember flying through the air and landing on oyster shells on the beach, suffering a bad gash to my head. I slept on and off through the next few days and somehow managed to avoid the high tides. When I came to, my artichoke skin was covered with dark green seaweed. I left one piece on–it made a rather fetching jacket. 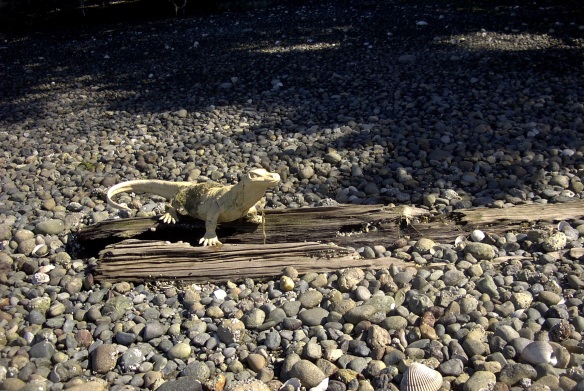 One beach-strolling human kicked at me with her foot, and then picked me up by the tail. Imagine the indignity–she upended me! As she picked me up, liquid poured out of the gash in my head. No, not blood and brains–just salt water.

She actually had the sense to perch me on a big rock, not far from where I had started out. The rock is in front of the house where a smaller-sized human lives, I believe. I adore this rock. After it’s heated by the sun, it’s pure bliss.

In this month of Seaweed and Spider Webs (drat those spiders–they think they rule the world!), I have survived. You could call me one happy dragon.