“Spinster” simply doesn’t do it anymore. Did it ever? Somewhere out there floating around in Etymology Land is a yet-to-be-born word that will describe women who choose not to marry. These women often live vibrant lives, sometimes devoted to careers they love, to close friends and family, and to a sense of fierce independence and adventure.

When we moved into our house 45 years ago, I had two different sets of spinster sisters who lived close by to demonstrate to me that the word “spinster” simply didn’t cut it. Both sets were Norwegian.

Mabel and Aleda were older. They both had retired from careers–a nurse and a teacher, as I recall. They wore their waist-length gray hair in buns or braided and coiled up on their heads. Kind, spritely, they became just a bit eccentric as they grew older. Aleda called me a couple times to come over and wash dishes for her–she had fallen behind and couldn’t catch up. Frankly, as I grow older, I don’t identify this so much as “eccentric” anymore–I recognize that feeling of being overwhelmed!

Janet and Alice, however, are the spinster sisters who have been on my mind. They lived next door to Mabel and Aleda, and only two houses away from us. Actually, they lived in Seattle, but their father, when they were children, had bought a five acre piece of property here on Liberty Bay and built a small vacation cabin for his family.

We only saw Janet and Alice during the summers when the weather was warm. They’d arrive in their big blue Volvo station wagon that they’d bought while on a European tour. They were still working jobs, so they took “vacations” over here–sprucing up the cabin, pulling weeds, and mowing the grass around the cabin with a push mower. Sometimes they planted a new little fruit tree. They always had time to visit. They plodded over in their old work shoes on a narrow path that connected our houses. We talked about how much the beans had grown, whether the little fig tree would bear this year, and the Stellar’s Jay that kept them company. Sturdy women! We would see them in their old swimsuits, heading for the cold water of the bay after a warm day of work. As the years passed, however, they came less often. They hired a neighbor boy to mow occasionally.

Mabel died first, and then Aleda. A few years later, Janet was gone, and then Alice. A young family moved into Mabel and Aleda’s house, but the blackberries, ivy, and weeds grew up and took over Janet and Alice’s five acres the next few years. The path that I used to take to get to their cabin grew impassable with blackberry vines.

A birch tree Janet and Alice brought from Europe.

Within the last two years, however, their nephew, not a young man, has begun clearing the property–but in no way is he “clear-cutting.”

“I’ve had people tell me I just need to bulldoze it, but I’m not going to do that–I want to see what my ancestors planted,” he told me. He estimates he has about 30 fruit trees there. He’s grubbed out around them, dug out dozens of thorny little Hawthorn trees and piles of blackberry vines. He’s pounded in fertilizer spikes around the old fruit trees and started to prune them. Like his aunts, he seldom comes during the wet winter months, but when the weather turns warm, he shows up–driving that old blue station wagon. He has gradually reclaimed the orchards. 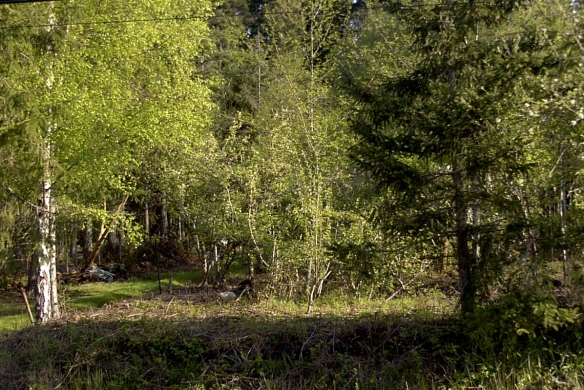 You can see where the brush has been cleared and even some grass planted.

I’m sad to see the wilderness go–it likely was home and protection to a lot of birds and small animals. This spring, however, for the first time in as long as I can remember, I glanced out the window and saw fruit tree blossoms between the bigger fir trees. The spirits of his aunts move among those blossoms.

I’m grateful for a few areas he has left wild.