Another summer slides through August and with it, all those moments of wonder that caught me off guard. These moments keep me getting up in the morning. They make washing yet again another batch of dishes just a routine and not a chore. They help me live with a sense of anticipation of what I’ll see today.

The Potter took this lovely shot when we stayed with family on Chuckanut Drive, one of the most beautiful drives in the country. We awoke to a cloudbank below us that looked like we could reach out and touch it. He actually took this last fall, but it was so beautiful I couldn’t resist sharing it here. This is a western view, looking out toward the San Juan Islands.

The kale not only over-wintered, but in the drab and dreary early spring it exploded into wild growth. I eventually pulled it up and planted new, but only after I had eaten and shared bags and bags of it.

My Hawaiian Hoya plant, which trails some 15 feet along a ceiling beam in the living room, puts out exquisite, clusters of star-shaped blossoms every summer. Each waxy star is less than the size of a dime. Their fragrance during the night will knock your socks–or your nightcap–off! I occasionally cut it back, but I don’t remember every re-potting this 35-year-old plant.

Bumble bees in the lavender–what great company when I’m in the garden! We work around each other, respecting each others space. When I do get in their way, they get a little ruffled, but never angry. 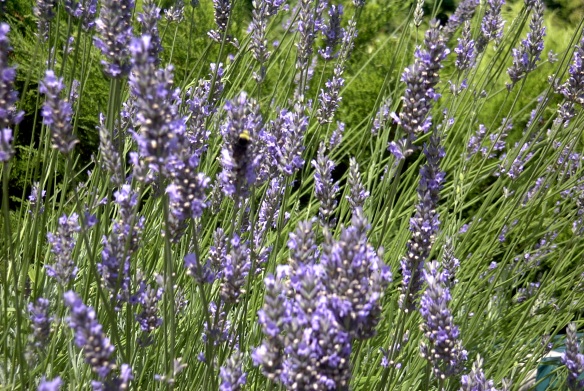 A little daphne had died at the back door some years ago. Plants do not like this “dead spot.” Shaded and under the eaves, whatever settle in there has to survive without sun or much water. I fussed for a year or two about what to plant and couldn’t come up with any good ideas. One day I noticed that this fern had sprouted! I planted the smaller fern at the corner to keep it company.

Norm, a master craftsman, as well as a master friend, built a beautiful swing seat for my old swing frame over the winter, so it was ready for lots of summer sitting. He has saved me many times over the years–replacing, repairing, and sometimes removing, like the fallen tree that blocked the driveway.

I have a magical rocking horse for adults in my living room that he built some years ago. His equally creative wife took this photo.

Scarlet Runner Beans were the hit of my garden this summer. 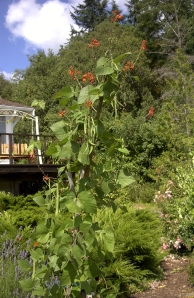 A delicious big pole bean, it also displays a bright red blossom, so it’s like having a huge bouquet of flowers in the vegetable garden. I’ll plant those again!

And from a lazy summer drive around Hood Canal, a photo taken from the west side…..

Mister Rogers, one of my favorite philosophers, knew about summer time and August. In The World According to Mister Rogers, Fred Rogers wrote, “How many times have you noticed that it’s the quiet moments in the midst of life that seem to give the rest extra-special meaning?”