Six blueberry bushes grow outside my kitchen window. They are stark and bare through the winter months, but in the spring their leaves fill in, highlighted with small white flower buds that will turn to summer berries. Occasionally in the spring I think to toss some fertilizer underneath them, but otherwise they take good care of themselves and require little attention. I think they’re a terrific plant to use in landscaping.

In July, as the berries begin to turn from light green to a rosy pink, I begin to see the birds checking them out, snatching the first barely ripe ones. Covering each bush with netting slows down most of the scavengers, but the most persistent fly underneath and up into bushes. Occasionally one will get caught in the netting, unable to finds its way back out. It flutters frantically as I walk by. When it eventually breaks free, I hope that moment of terror will imprint on its tiny brain and it won’t risk a return trip. One year I skipped the netting and the birds left me only a handful of berries to savor.

The netting comes off gradually, bush by bush, in August and we pick blueberries all that month. As I take a net off, I hang an empty CD disk in the bush. Over the years I have tried all kinds of tricks–stuffed animals, a plastic owl, strips of silvery plastic tape that shimmer. I have come to believe that those tiny bird brains actually DO process quite efficiently. Almost any of the tactics works for a short time, but after a few days they figure out that the spinning, reflective disk will not attack.

However, the disks do tide me through the first part of August–and then, by the middle of that month, the birds wander off, just about the time all the netting is gone. This coincides with the time the wild blackberries up the hill are ripening, and I think they have moved on to that enticing crop. 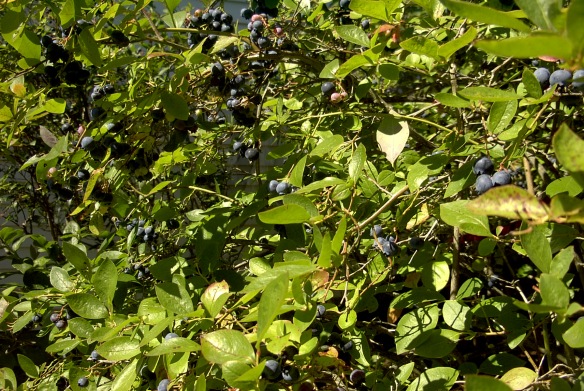 I freeze one or two gallons of berries, bake cobblers (often mixed with my apples) and invite friends to pick. The grandchildren graze. A friend’s grandchildren call me “Mary Blueberry.” Every year I am shocked all over again by how heavily those six bushes produce.

But my favorite blueberry time is September. A few berries on each bush have survived the birds, my earlier pickings, the pillaging of my grandchildren and friends. Every morning as my oatmeal cooks, I go out in the cool morning air and pick a few to sprinkle over my cereal. The berries are fully ripe and sweet by now, unlike the tart berries of early summer that we impatiently nibbled. The best mornings are the sunny ones when I can eat outside at the picnic table that faces the bay.

The leaves will begin turning soon now in October, even before the berries are completely gone. The green will give way to oranges and pinks, and then a bright, flaming red. Splashy, lovely color will show through my kitchen window.